In her open letter for TIME magazine, the 23-year-old Women’s No.1 tennis player, Naomi Osaka, writes: “Athletes are humans”. This simple yet poignant sentiment is at the heart of Garret Bradley’s new, meticulously constructed, three-part docuseries 'Naomi Osaka’, which peels back the mask of the highest-paid female athlete of all time; to reveal a raw portrait of a young woman learning to bear the cost of her exceptional talent. The series joins an increasing number of sports documentaries that have graced our screens in the last eighteen months, like Netflix’s ultra-popular ‘The Last Dance’, on the career of Michael Jordan, and the tennis doc ‘Andy Murray: Resurfacing’. Yet this series is unique in displaying not only the highs and lows of a sports career in the spotlight, but also the toll that such success takes on an individual’s wellbeing behind the scenes.

The documentary begins at the moment where Osaka was first launched onto the international stage; her dramatic defeat of her childhood tennis hero, Serena Williams, at the 2018 U.S. Open. The rest of the series tries to document the pressures, and answer the existential questions, that such a huge achievement thrust onto Osaka at such a young age. At one point, she muses: “To anyone that would know, they know me for being a tennis player, so what am I if I’m not a good tennis player?”.

Sports stars devote every waking minute of their existence to becoming better than the rest, but this dedication comes at a price; the sacrifice of socialising, developing personal relationships, and going to college. What we see in ‘Naomi Osaka’ is an individual who reached the top of their game at the ripe age of 20, only to look around and realise that they stood alone, isolated by their achievements. 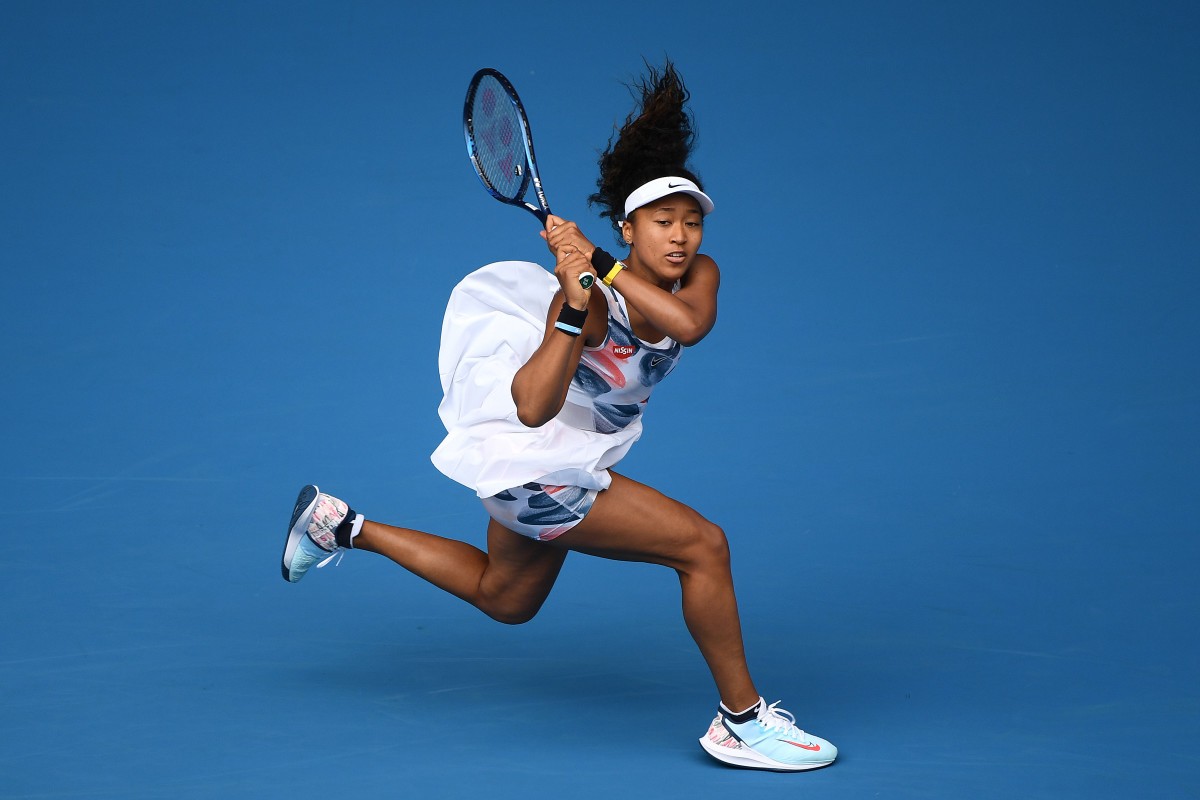 The most striking element of the documentary is the presentation of two, diametrically opposed Naomis. On the court, Osaka is a dominant, razor-sharp focussed force of nature, effortlessly delivering racket-breaking serves and monopolizing international tournaments whilst barely breaking a sweat. Away from the spotlight, the 23-year-old is shy and reserved, brimming with self-doubt and burdened by a naturally philosophical inclination which leads her to question the larger meaning, or purpose, of the life that she finds herself living. With a strict regime of training, competing, and press duties, there is precious little time that Osaka has to herself, and this private time is underlined by a palpable loneliness and anxiety that stands in stark contrast with the crowded courts and conferences that fill the rest of her time.

The docuseries’ visual style reflects the isolation and disorientation that its’ subject experiences. Osaka is often shot from slanty angles, which present a distorted, topsy-turvy world that teeters on surrealism. The camera often seeks her out at a distance, from outside a patio window, or from the back corner of a press conference, delivering a sense of remote detachment from the star. A combination of professional tennis match footage, and private, more intimate scenes centralize the contrast between these two arenas of Naomi’s life and provide the rhythm as well as the emotional impact of the series. An enchanting score by Devonté Hynes and Theodosia Roussos (otherwise known as Blood Orange), subtly underscores and glues together these dissonant parts with an almost haunting significance. 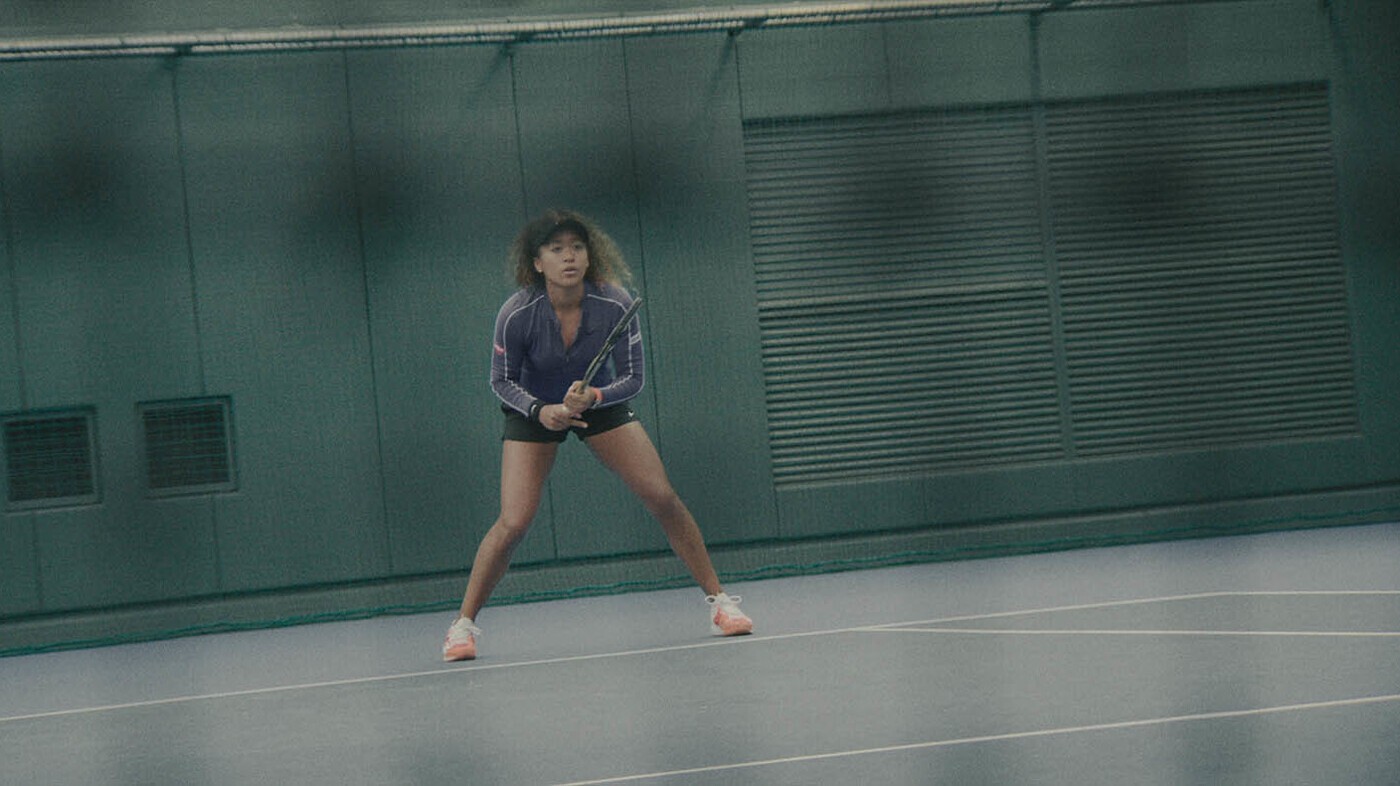 A meditative intimacy is achieved by allowing Naomi to tell her story in her own words. There are no staged interviews with showrunners and producers, only off-the-cuff, spontaneous comments and personal, vulnerable, voice-notes and videos that the star has self-recorded. These features powerfully gift Osaka with an agency that she seems to have been missing throughout her sports career and offers up a unique documentary style that is more concerned with its’ subject’s personalised point of view, than with the filmmakers’ own presentation of events. So often, sports documentaries slip into a kind of hero-worship, which can dehumanise their subjects and fail to delve beneath the surface of a super-human exterior. Bradley’s docuseries is refreshing in its’ resistance of this tired narrative, and in opening a dialogue about the complexities and vulnerabilities of our most beloved sports heroes.

If the series feels like it is missing a fourth episode, it is to give us the impression that there is more left to say, and a continuing story left to be told, in Osaka’s life and career. Like Osaka herself, this docuseries is quietly powerful; brutally tough and vigorous when it needs to be, yet subtle and thoughtful when the lights have gone down.

‘Naomi Osaka’ is streaming now on Netflix in the UK.