Get ready to kick-start your career in film or television. Our 1-year Filmmaking Diploma gives you hands-on, practical training in all aspects of filmmaking as it equips you with the skills and knowledge, and provides the on-going support you need, to excel in your chosen field.

We're huge fans of the London Film Academy (LFA) here at the Imaginarium having worked with several of their graduates over the years. We're always incredibly impressed at how well prepared they are in the art and craft of filmmaking. It's clear that Anna MacDonald, Daisy Gili and the rest of the team at the LFA are doing a wonderful job preparing their students for life in the industry.

This comprehensive multi-disciplinary 1-year Filmmaking Diploma is designed to teach you the absolute must-have skills for becoming a collaborative filmmaker in the 21st Century. You will have not only a supportive network of established film professionals guiding you (read more about our tutors), but also access to state-of-the-art digital equipment including ARRI ALEXA, as well as S16mm film to work with, and a team of ambitious students creating work alongside you as you build your extensive film portfolio - not to mention your own little black book of professional industry contacts that you’ll leave with.

This Filmmaking Diploma is a must for anyone who thrives in an intense environment that mimics the real-life challenges of this industry. As a school we boast an outstanding 95% of our graduates going on to work in the industry within three months of completing the course. Do you have the filmmaking get up and go to become one of them? Join us on this filmmaking adventure in London’s best-loved film academy.

The London Film Academy gave me the opportunity to meet important players in the industry. They have always been there to help me find my way and develop my knowledge, even after the course had come to an end.

Supporting the Safety of Our Students during COVID-19

At London Film Academy, students are at the heart of everything we do and our priority is first and foremost the health and wellbeing of our students, staff and tutors.

London Film Academy’s intensive one-year Filmmaking Diploma is designed to provide students with a thorough grounding across all filmmaking disciplines, enabling them to become adaptable filmmakers with a strong repertoire of industry-relevant skills. Our comprehensive approach provides hands-on training across six key filmmaking disciplines - directing, producing, editing, screenwriting, cinematography and sound - enabling you to discover where your strengths lie, ensuring that you leave London Film Academy with a wealth of skills and practical knowledge.

LFA filmmaking students receive over 30 hours of teaching time per week - more than twice the amount you'd get on other typical Level 7/postgraduate courses. Tutors are current film and TV professionals who are encouraged to adopt a teaching practice that reflects industry trends and demands. In this way you are given the skills and knowledge that will help you stand out when looking for work in the film industry. Through tutor support, workshops and complimentary membership to the LFA Filmmaker’s Club you gain access to a wide range of industry jobs, networking opportunities and work experience placements.

Unlike other film schools, all course materials and film budgets are included in your course fees. Using both Super 16mm and high end digital cameras (such as the Arri Alexa or Sony F55) you get to create a broad range of projects and work on a high number of film shoots including: commercials, narratives, two, four and eight minute films. This all ensures that you leaving LFA with an impressive showreel of work.

Graduation takes place at the National Film Theatre at BFI Southbank where students will get to see their final films showcased on the big screen in front of invited family, friends and special guests.

Upon successful completion of the LFA’s Filmmaking Diploma, students will have the opportunity to use their diploma qualification to progress onto our MA Filmmaking or MA Screenwriting degrees in partnership with University of Derby.

LFA Filmmaking Diploma is a multi-disciplinary hands-on course, designed to enable students to make creative decisions and receive constructive feedback in a safe, nurturing environment. Over three terms, the Filmmaking Diploma progresses naturally from a basic introduction to aesthetic and technical aspects of filmmaking to wider, more complex problems posed by film production.

Screenwriting
Students explore in depth the narrative short film format, from concept and character to dialogue. A proportion of student scripts are selected to go through intensive workshops (script editing and written feedback) until they are ready to go into production. Students learn early on in the course that in the film business “writing is rewriting” and so modelling industry practice takes priority during the development period.

Directing
Students are taught the fundamentals of directing, from looking at the script to pre-production, production and editing. Students are encouraged to take on the role of a storyteller and team leader. A number of individual projects (visual narratives) are set and the finished film analysed in the class. Students work with actors to understand staging, text analysis and casting. During the pre-production of graduation films students have one-to-one feedback and advice from an acclaimed film or TV industry director.

Producing
Students are trained in both line producing/production management and creative producing to maximise their opportunities for work in the film & TV industry. Students acquire a working knowledge of EP Budgeting & Scheduling software, contracts, copyright, distribution and the basics of financing for independent filmmakers (for both short and feature films). Students also receive pre-production and on-set support.

Cinematography
Students cover a number of roles: director of photography, gaffer, camera operator, 1st and 2nd camera assistants and grip (track and dolly). Predominantly, students work with Super 16mm film cameras to thoroughly understand the nature of light, framing and the mechanics of film. Classes are taught by, and shoots are supervised by, many different members of the British Society of Cinematographers. Students are exposed to the highest standards of practice by some of the world’s leading directors of photography.

Production Sound Recording
Students learn: the definition of sound and the physics behind it, the physical recording of production sound on digital recorders with a range of microphones including radio mics, working to a frame, multiple tracks, and the craft of sound design and track mixing. Some practical sessions are combined with cinematography and all graduation films are recorded with live sound.

Editing & Post-Production Sound
Students work with existing drama materials and rushes from their own individual projects to learn Avid Media Composer. These practical sessions are woven together with theory lectures that include cutting techniques, filmic time and space, editing styles, setting audio levels and foley, a brief history of music in cinema and the aesthetics of film music, and a practical guide to working with a composer.

Individual Film Projects and Commercials
Throughout the course students are given an opportunity to direct and work on a number of projects, including short films and commercials. Tutors guide and assess students through a formal shooting experience on Super 16mm film and/or digital formats with professional actors. This supportive environment is where students discover their strengths as they perform selected crew roles. Constructive feedback is an on-going process throughout the course. Written assessments cover technical, creative and collaborative capabilities.

Production of Graduation Films
Students pitch to secure a head of department role, such as Director of Photography, Producer or Director, and work as a team across a number of films, rotating through a variety of crew roles.  Role allocations are decided upon using student pitches, previous assessments and careers guidance.

Students are given autonomy in their decision-making and manage a several-thousand-pound budget. Students decide what proportion is spent on film stock, locations, actors and other production costs. Each crew role has its own clearly defined function and responsibilities, giving students an experience of the industry roles in conditions emulating those of a professional film set. A director works with a writer to develop the script and with an editor to edit the film.

We provide pre-production and on-set professional technical support. Students have the opportunity to apply their knowledge in a supportive environment and to find their own creative voice.

Film Festival Attendance
Students are encouraged to attend events and screenings at a range of film festivals throughout the duration of the course. LFA is involved with a variety of film festivals both within the UK and Europe. In addition, students are invited to attend workshops held at these festivals and facilitated by the LFA. Where possible, students will be issued with delegate passes for relevant festivals, where we actively encourage attendance at screenings or networking events. Such festivals may include the Encounters Film Festival or Aesthetica Film Festival (BAFTA qualifying festival).

Enhancing Students Film-School Experience
Together, students form lasting professional and personal relationships. LFA is a filmmaking community that operates like a production company. Students from all courses regularly support one another, thus enhancing their film-school experience: for example, the Screenwriting Diploma students submit scripts for production and join the sets of the Filmmaking Diploma students’ films.

Graduation
All the excitement of seeing your work projected on the big screen is shared by your friends, family, cast and crew, at the LFA annual Graduation Ceremony & Awards which take place at the BFI. You are presented with your Filmmaking Diploma from the hands of industry personalities such as: Baroness Kidron, Nicolas Roeg and Roger Greaf. 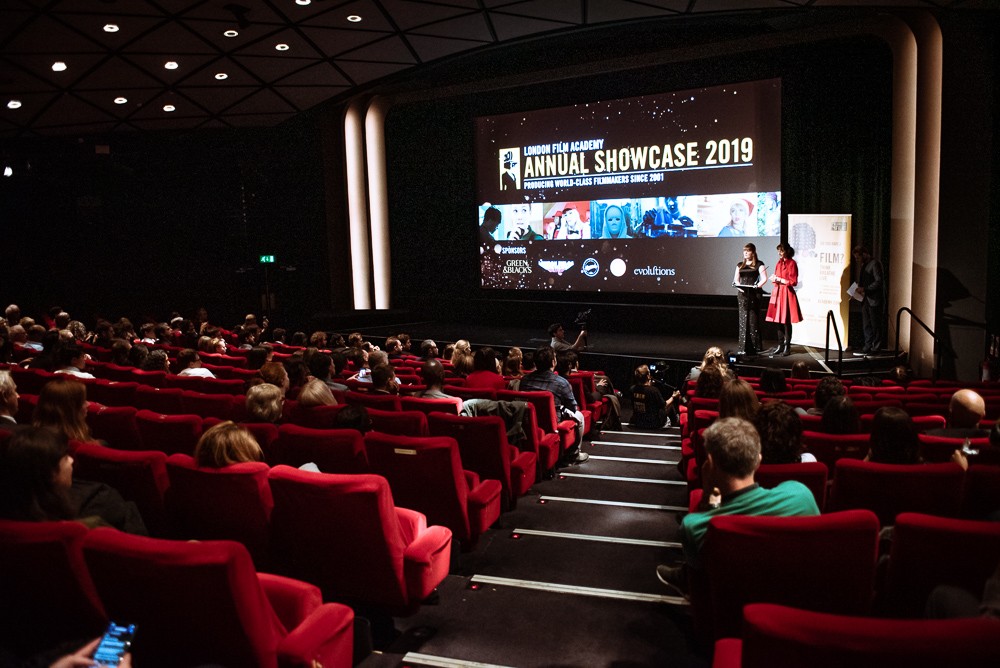 To learn what some of our graduates are doing now you can read our Graduate Stories.

The Filmmaking Diploma fees are all-inclusive of film production budget and there are no hidden costs.

The full Filmmaking Diploma fee is £23,000 - This is inclusive of film production budgets and there are no hidden additional costs.

There a number of financially assisted places (bursaries) available per Filmmaking Diploma intake. These places are awarded on merit and at LFA's discretion. Please visit the fees and funding section of our website to find out about these financially assisted places. For further information please contact our Admissions Coordinator on +44 (0) 207 3867711 or email admissions@londonfilmacademy.com

To book your place on this course please apply via the APPLY + COURSE DATES & FEES section. As soon as we've received your application we’ll send you a confirmation email containing information on the next steps. Please check your ‘Junk Mail’ folder if you appear to have not received this email.

What kind of students are we looking for?

To study at LFA, it is essential that you can communicate effectively in English. You will need to provide evidence of your proficiency if English is not your first language. For international students, we accept either the IELTS ACADEMIC qualification (minimum IELTS score of 6.0) or a document from UK NARIC confirming the comparability of your English language qualification.

To apply online please click on the course date below.