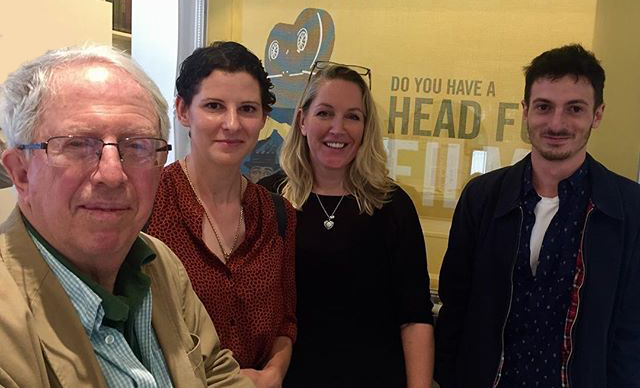 It was the last day for our students on the 6-week Documentary Certificate course, and after all their hard work, they were able to screen their films in our cinema in the presence of Documentary expert, Roger Graef OBE. At the conclusion of each film, Graef used his years of documentary experience to advise the students on how to improve their films and how to move forward with the next steps.

At 26 years old, Graef came to London from New York where he worked as a successful theater director before shifting his career to produce documentaries. Fifty-five years later, not only has he received a Lifetime Achievement Award, but some of Graef’s works are still utilized in the media today.

At the showcase, the three graduating students, Nico Varanese, Sharon Gilburd, and Miranda Fitzgerald introduced and debuted the two short documentaries they directed, produced, filmed, and edited during the 6-week Documentary Certificate course.

The first film, entitled 'My Antidepressant Hell', showcases the life of a man named Terry who has suffered with depression and withdrawal from antidepressants for years. This emotional story uses Terry’s emotive facial expressions and personal statements to bring awareness to the overwhelming after effects of using antidepressants.

The second film, 'Storeys', displays the emotional reactions of community members after the tragedy of the Grenfell Tower fire in early June. By cutting out people's faces, the students used voiceovers and passing images to highlight the effect that the tragedy of Grenfell has had on the community.

There is no doubt that our graduates are on their way to make successful futures in documentary filmmaking!